After returning to the San Francisco bay area, film in hand…”Betty and Eva” was well received but it got me nowhere professionally. All that came from it was an invitation to propose an artist in residence project to the Exploratorium in SF which was a marriage of art and science. the Exploratorium was founded by the brother of the father of the atomic bomb. I proposed a steel levitating chair. After some lengthy calculations one of the electronics experts there announced that if it could be done it would require all the power currently used in the building.

I heard that ILM , George Lucas’ special effects company, had moved from LA to Marin county. and, what was more, they were looking for model makers. Through a contact at Francis Coppola’s zoetrope company I was able to make contact and send some slides of my work.

To my shock and amazement I got a call for an interview.

The name of the door was Kerner Optical Research. the street name was Kerner. Lorne who was the dept head told me they had a sequence in the new star wars film Empire Strikes Back which required models of buildings that resembled my sculpture . He said he would call me if they indeed needed me.

I was so excited.

My first day at ILM was a view into the heart of magic. When I saw Star Wars I commented afterwards, where did they get a place big enough to build and shoot that star destroyer ?

As I stood by the new star destroyer I would be working on I was amazed at the intricate detail on it. I was close to being finished and was around 6 ft. long. The actual star destroyer from star wars was just a few feet away and it was about 3 ft long !!

Lorne is a very good manager who is warm and friendly and is a encyclopedia of information on almost anything you can imagine. he is also very skilled.

I met charley bailey an experienced industrial designer who after an attractive woman would walk by would sniff as if he were a hound taking in a female’s scent.

Steve Gawley, is a tall red head that is as much a fan of star wars as he is a gifted model maker as well as good manager. he is also very hyper.

Paul Huston, is a very tall 6 ft 5 in very quiet model maker who is also extremely skilled. Paul was in charge of the new star destroyer.

Ease Owyeung is a short, slightly built Asian man with a background in architecture who would become my favorite manager, dear friend and trusted advisor.

I especially remember Lorne introducing me to Mike Fulmer as he walked by. mike wore a leather bomber jacket. he walked like john Wayne. talked like jack Webb, and had the presence of Steve McQueen. he was also the only one in the department that actually made models in their off time.

when introduced he gave me a look as if to say, “I don’t know who the fuck you are or what the fuck you can do, and I am only taking these 10 seconds to acknowledge your presence out of professional necessity.”

I was a wood craftsman. I knew virtually nothing about plastics. 90% of what was used in the model shop was plastic.

My work began on the off camera side of the star destroyer waist band. The recess around the sharp edge of the arrow shaped form that defined the ship.

Why detail the off-camera side? simple.A hedge against the usual double cross that occurs when the story boards call for shooting from one angle and the director of photography or effects supervisor decides when it us time to shoot it from the opposite angle.

the music playing was Dire Straights. as I pondered the challenge I faced I was so happy. after so many years of working alone with no sense of clear purpose, no sense of professional status or advancement, knowing very few sculptors up to my level of skill and craftsmanship this was ground zero.

And so I stared at the simulated miniaturized industrial complexity that George called greeblies and tried to understand it. looking at it everything looked like it was purposeful and had a function but nothing really was and nothing really did . . .anything!

This is how greebling works. starting with a huge number of model kits. . . military tanks, ships, trains, motorcycles, planes etc. you go through them looking for good parts. what is a good part depends on where and how you are going to use it. one trick that is useful is to try and find pairs or if possible multiples of the same part. use of these helps create a look of credibility and purpose that visually rings true. if need be the parts are cut and or filed, notched etc to fit. . .I might take three hours to do three inches. a lot depends on how the shot is storyboarded. if a certain area is boarded for what is likely to be significant screen time then much more care is taken in detailing that area.

I was Chris Wales’s assistant on raiders of the lost ark. Chris was one of the best special effects make up artists around. and like many other stars in the industry Chris came up to Marin county to work at ILM so that he could then work with George. and also like those same stars, Chris would find out that George works alone. but I was happy to work with Chris who has the greatest dry sense of humor and sarcasm was endlessly entertaining.

there were three “head” effects in raiders. an exploding head, a shriveling head and a melting head. Chris had already done the exploding head shot. I was tagged to help him with the second and third shots. this work required molds and castings of the actors heads in the movie. there needed to be a perfect likeness of the effects heads and the actors face etc. the shriveling head was the most fun. Chris had already made a scull to match the actors skull but he had cut deep grooves and channels in the skull. this was so that a latex skin in its neutral state supported by the scull inside made the head look like the actors head. add to that conventional make-up and hair etc. and it looks pretty real. the shriveling happens when a seal is made on the latex skin such that a vacuum hose in the skull will such down the skin into the creases and channels and grooves in the skull creating a dried up shriveled look. but that was not all there was to it. far from it. blood and puss needed to come out of him. so we attached hidden tubes to his mouth, eyes, nose , ears and the other ends of the tubes went to various devices that would pump the stuff out of those orifices… when it was all set up and the head was all made up and his dummy body was dressed in the authentic German uniform with the camera frame showing the full head cropping just below the chest we were ready for take one. we, there were several of us doing the squirting, oozing, etc., had not done a full test yet so this first take was our first real go at it. not knowing how much force to apply we erred on the side of more rather than less for fear of losing the shot due to insufficient body fluids etc.

so, its a tight fit all of us kneeling down, the camera dolly, the camera, the lights, various lighting apparatus and of course the puppet. we hear the director of photography say,” is every body ready?” no reply, “is anybody not ready?” silence. “ok roll camera. . .. and .. .. action!” the vacuum sucks the skin down and we all force our fluids through the tubes. we hear,” cut.” and then a beat later a chorus of “oooooooooooeh . . .yuk!” simulated blood, pus , mucus had squired out every orifice and onto everything within a 5 ft radius. what a mess. but that first take still stands as the most fun I have ever had with a particular shot. 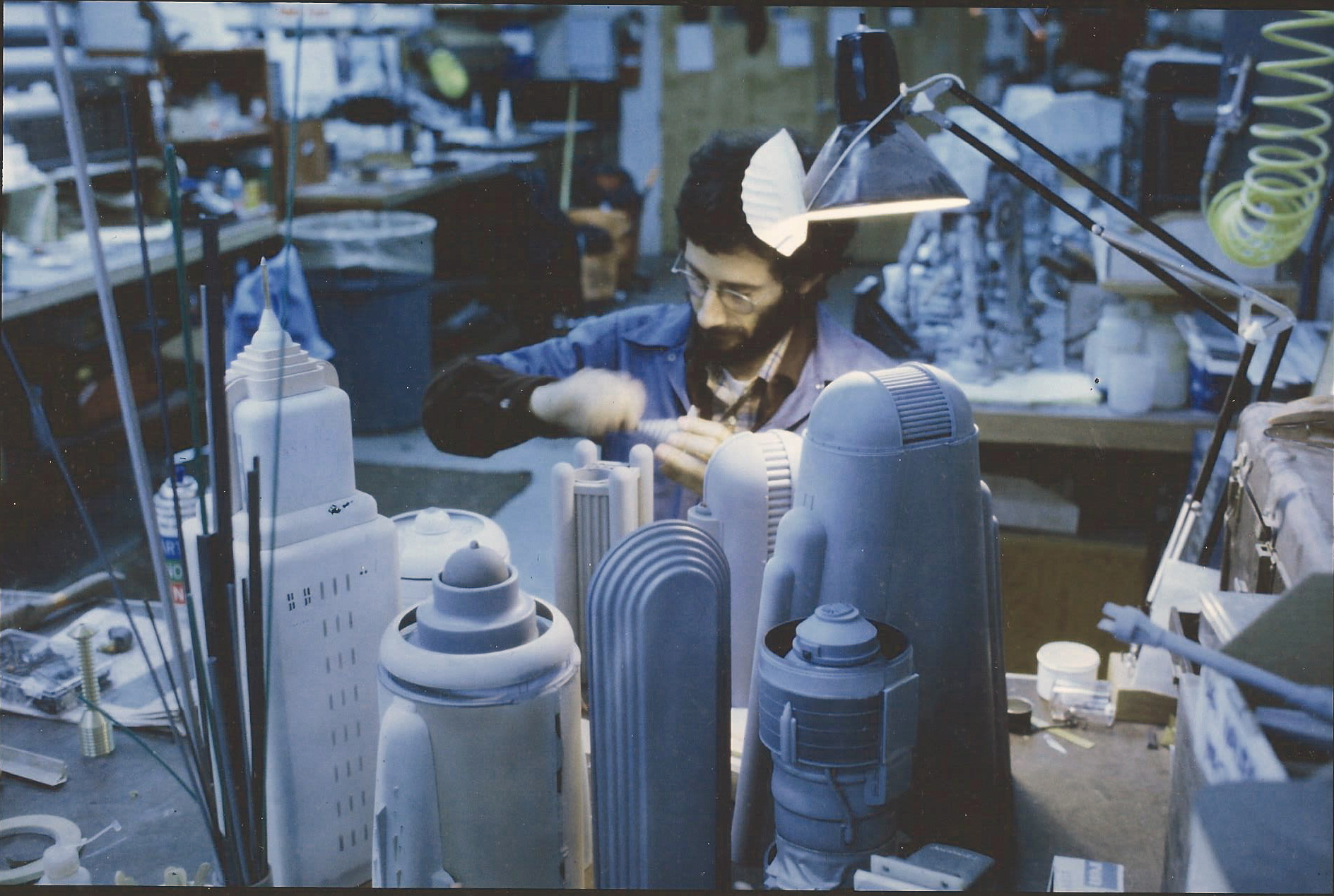 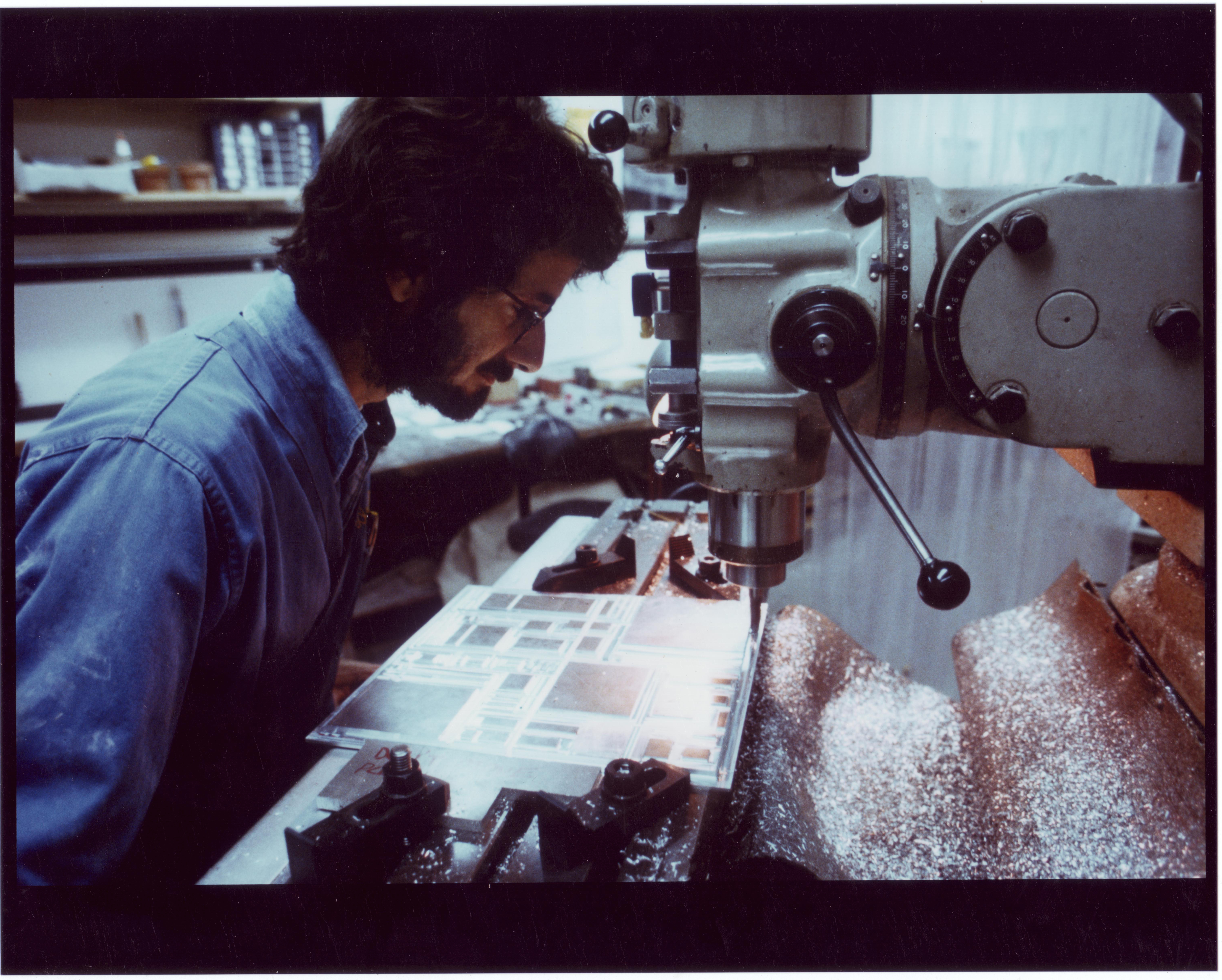 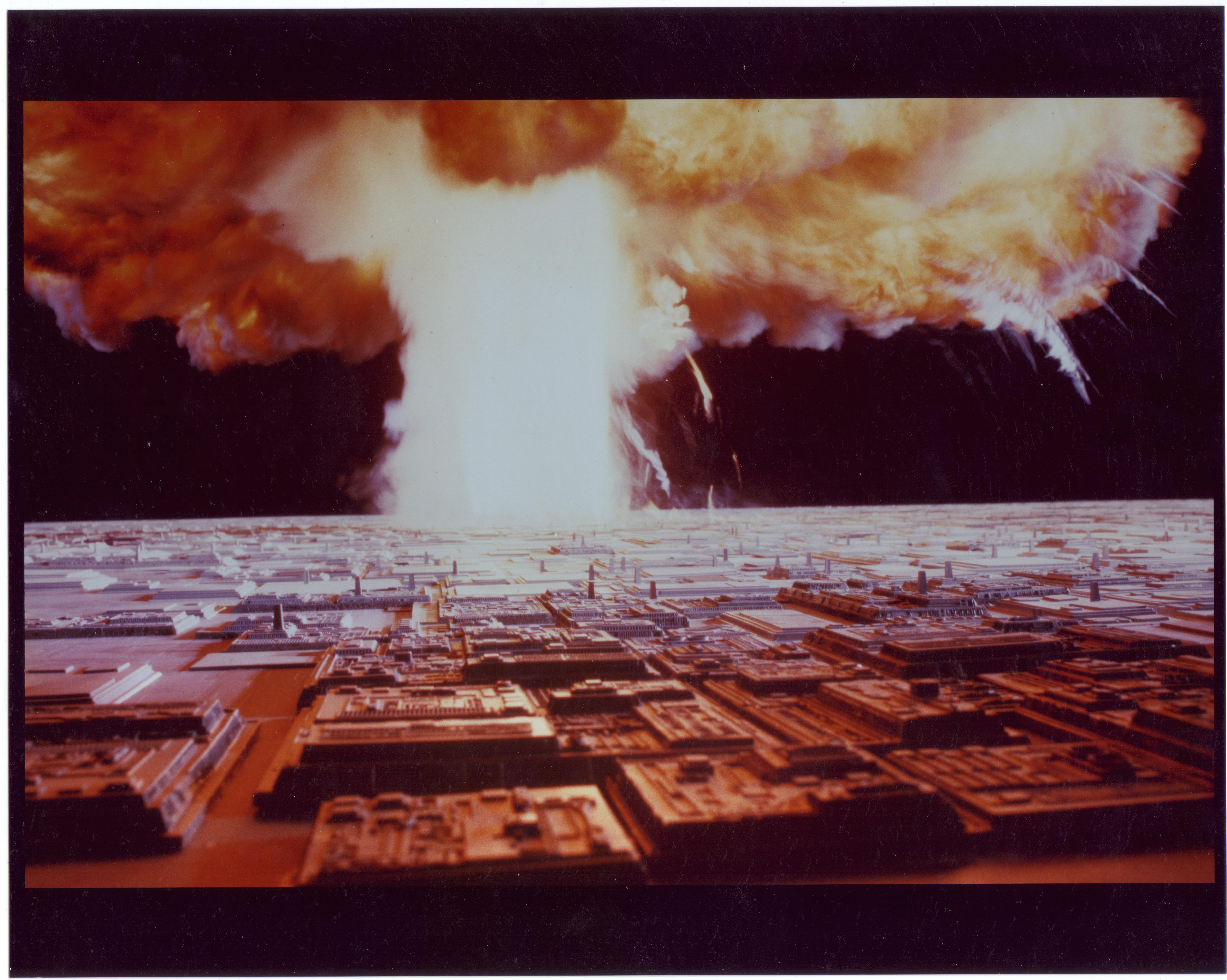 Vader’s Crash
into the 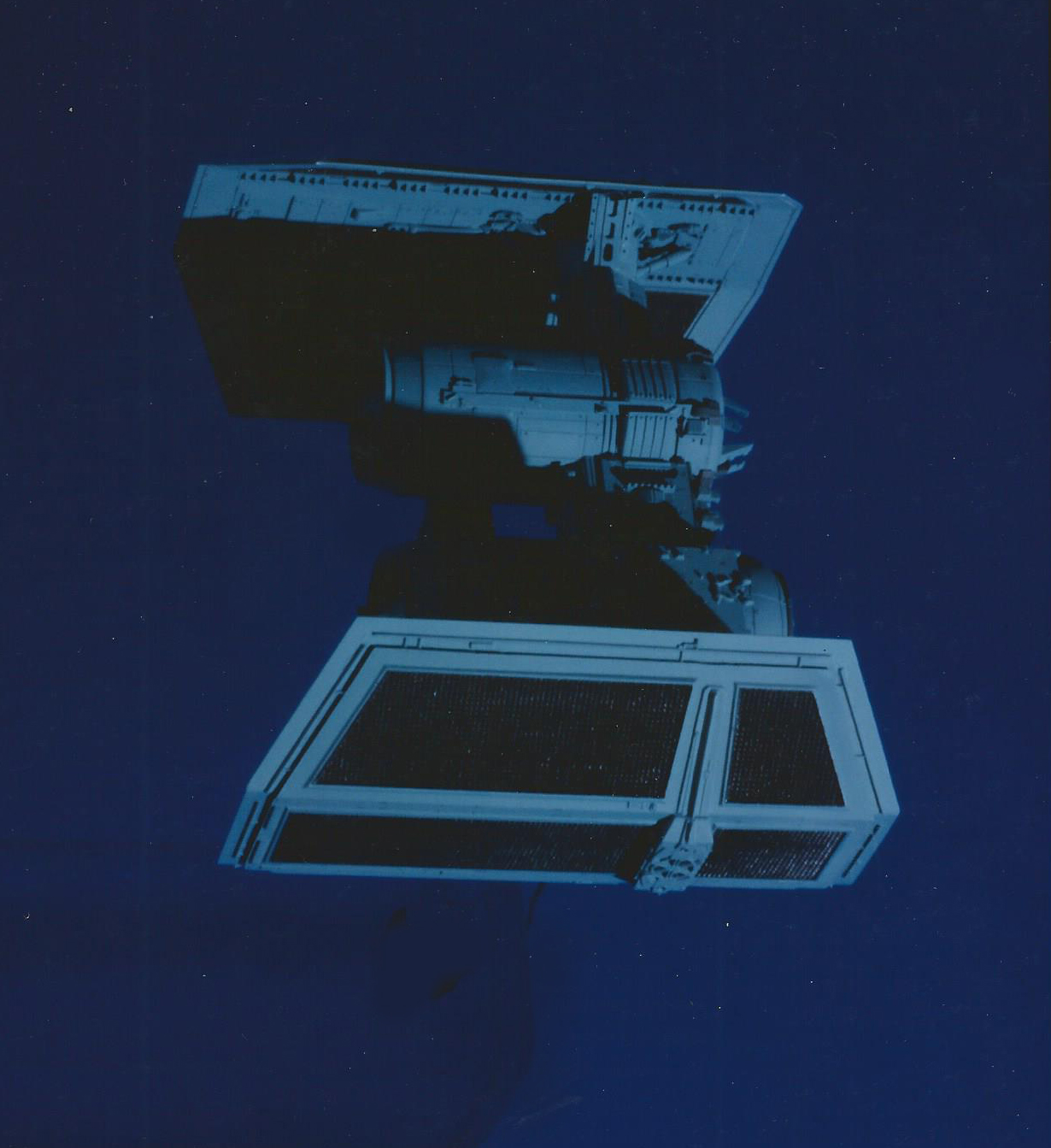 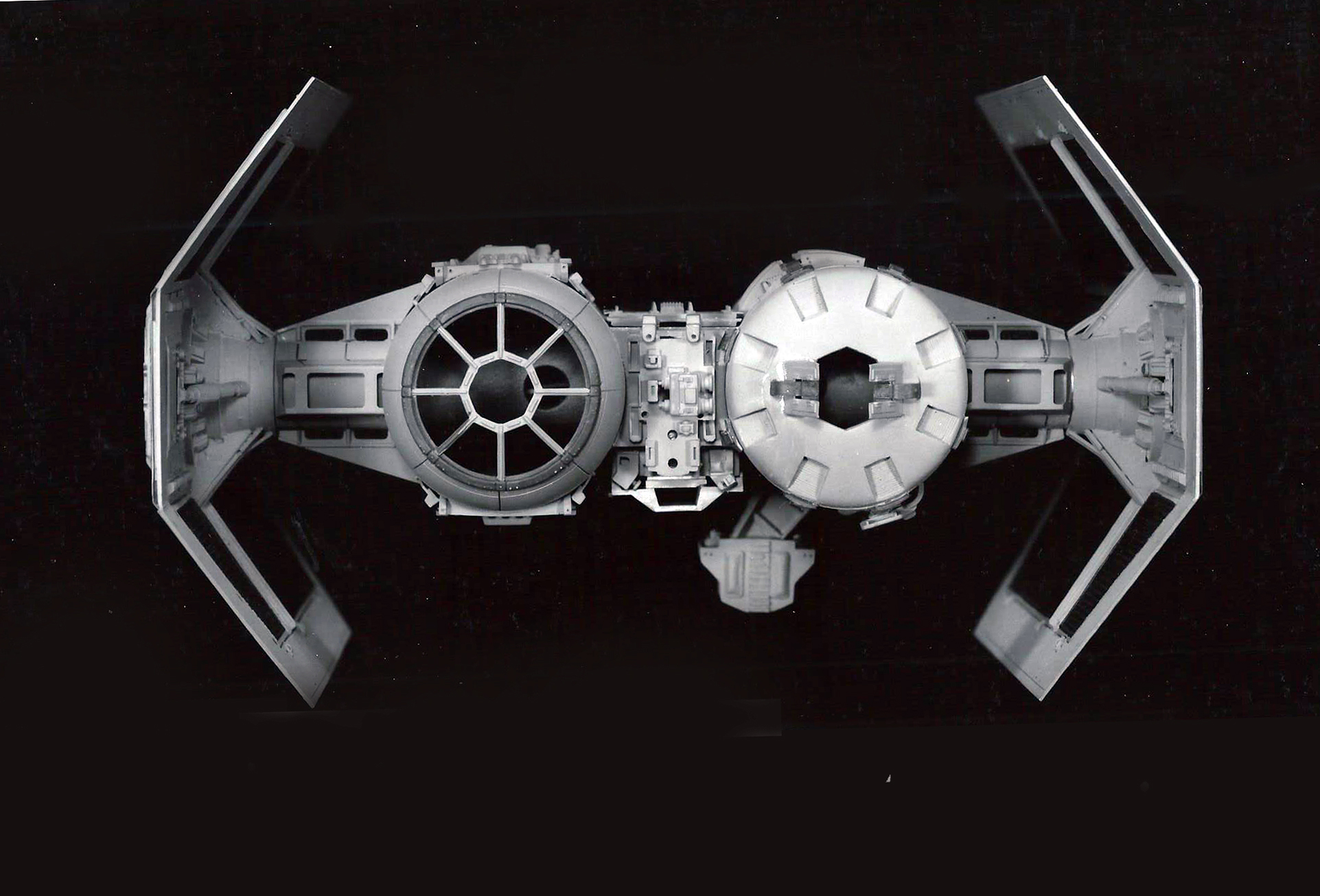 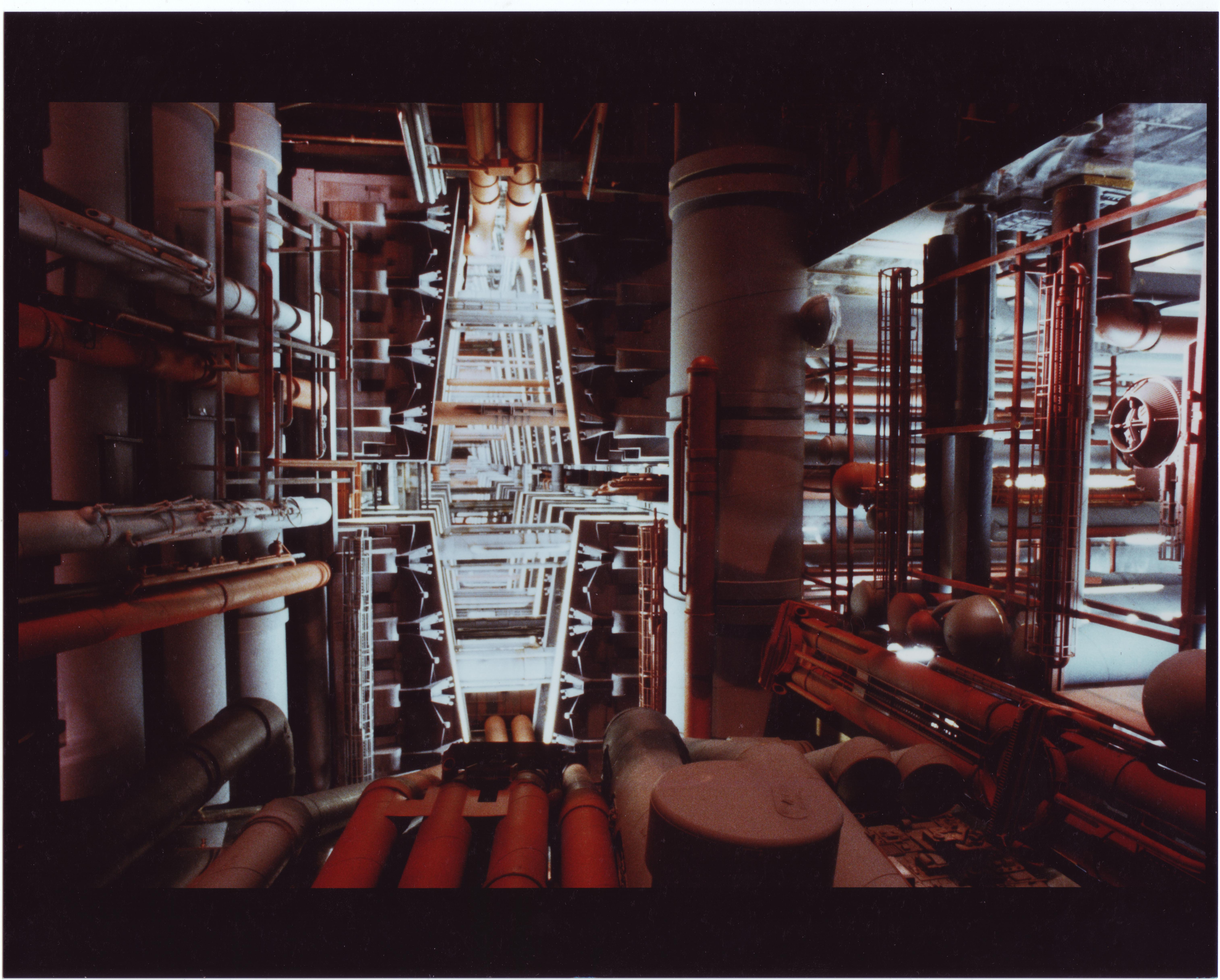 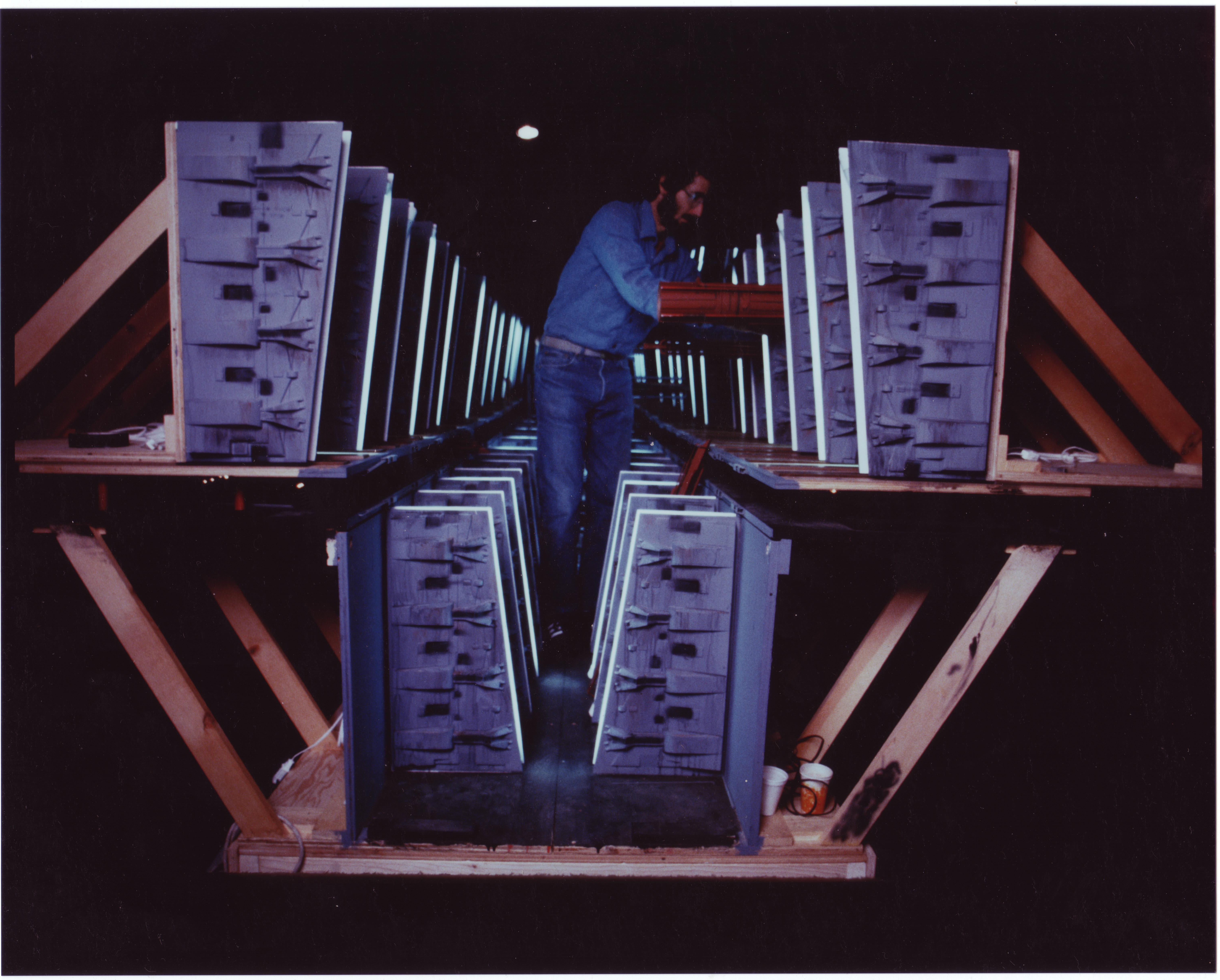 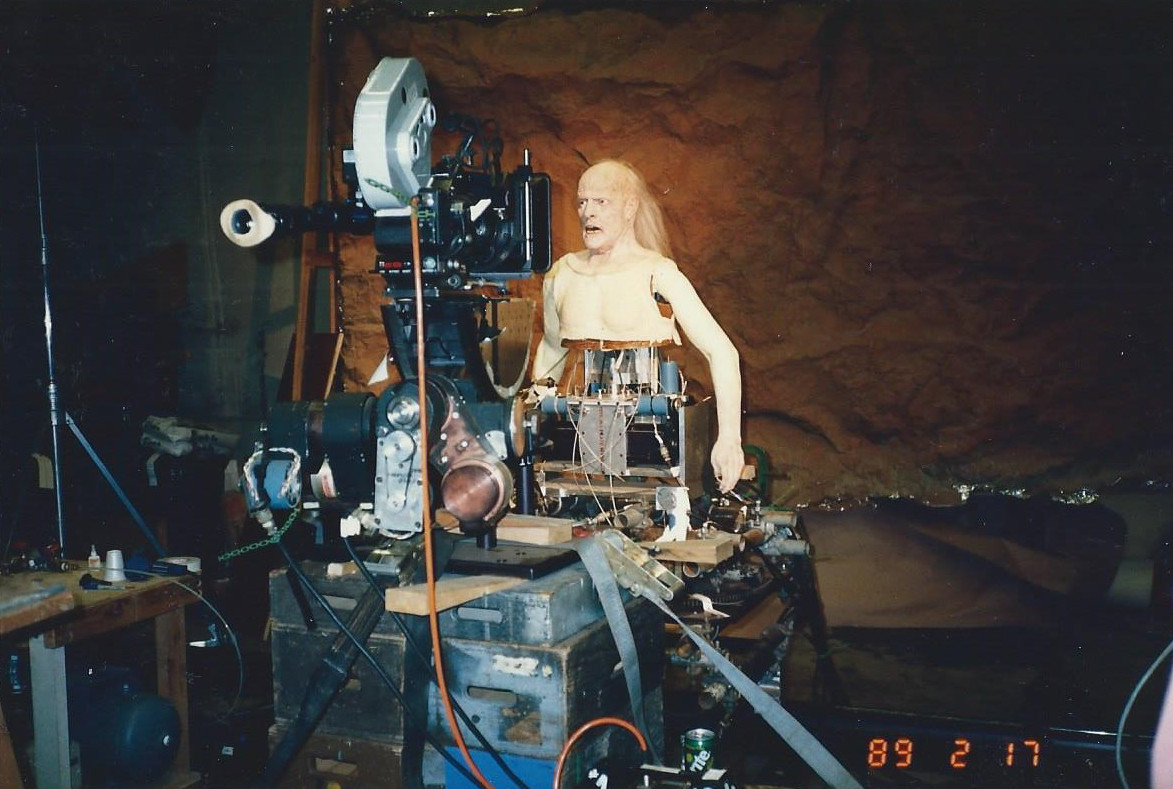 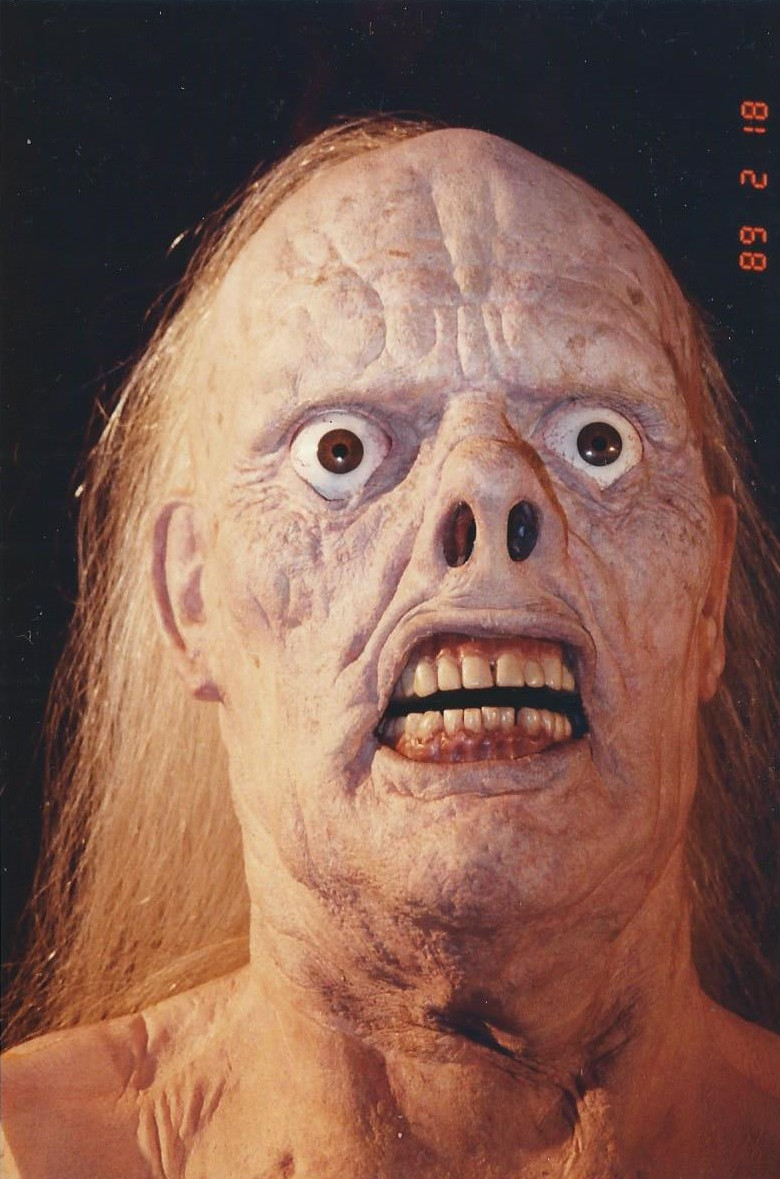 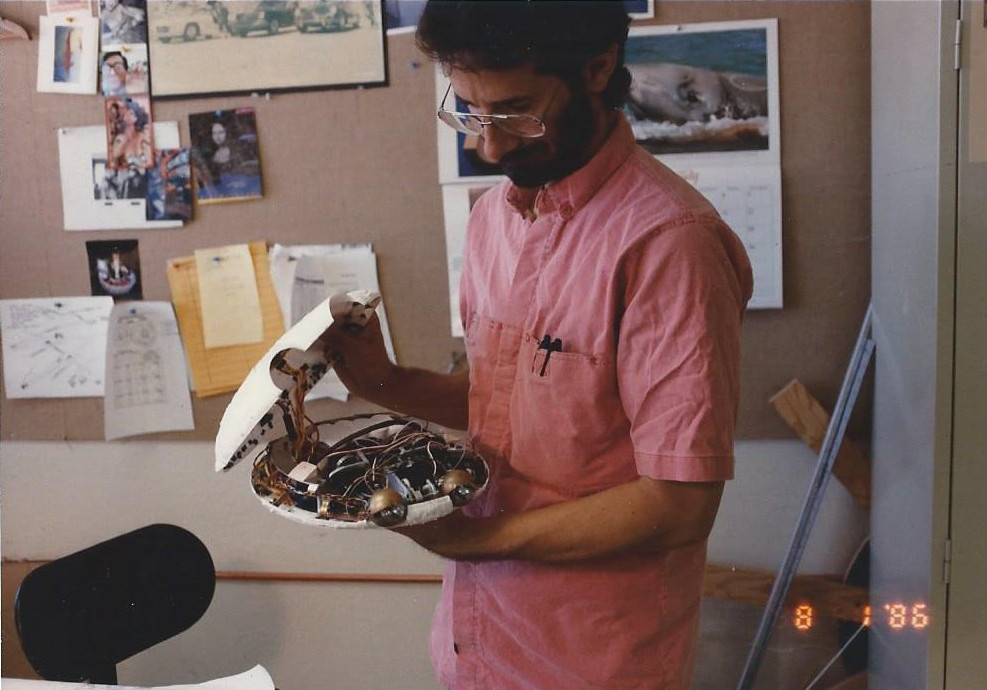 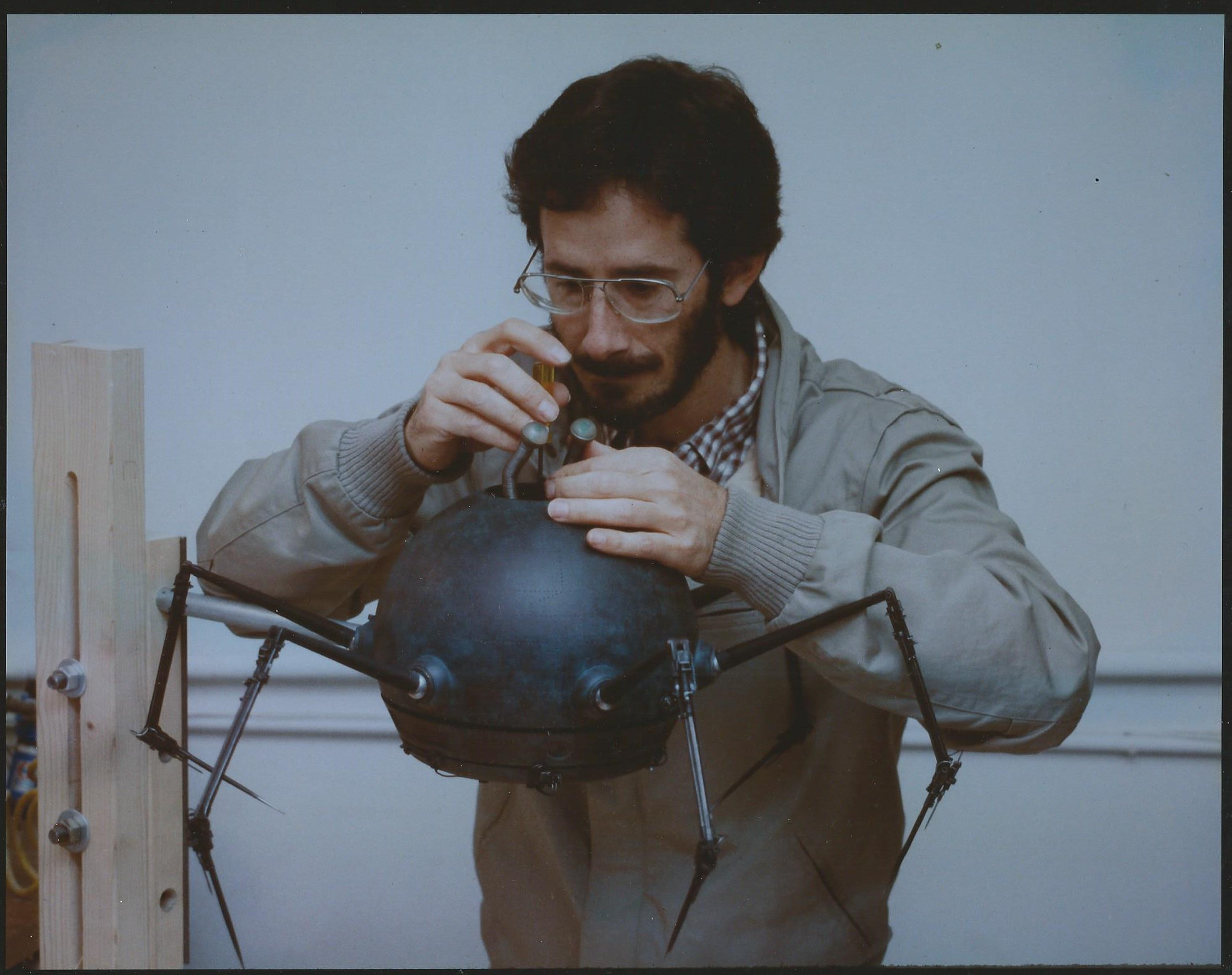