I don’t know whether I came up with the idea for Robot Wars or the idea came up with me. It happened during a period in my life when a number of things converged in a particular way.

In 1992, I was working as a senior designer for LucasToys, a new division of LucasFilm. Early that year, I pitched a concept for fighting vehicles to a major toy company. The response was strangely indifferent. All that was said was “Some day someone is going to figure out how to do this.” I was perplexed, but let it go at that.

Around this time I was also independently pursuing an invention concept: a radio-controlled vacuum cleaner. The idea was to turn a chore into play … to make vacuuming fun. I built a radio controlled tank and modified by putting a battery powered vacuum cleaner on it. It was fun but not very useful, so eventually I gave up on it.

One day I took the vacuum off the tank and as I looked at it, the 8-year-old boy in me envisioned its potential as a dangerous toy with battery powered tools mounted on it … I had a vision of it cutting its way through a wall. That reminded me of my fighting vehicle toy concept which bought forth the entrepreneur part of me … as it was instantly clear that this was to how to make the idea work: I could stage events and invite competitors to build their own vehicles to compete in them. Merchandising revenue from licensing would be the principle revenue stream … i.e. toys. Robot Wars would own the licensing rights to mechanical athletes that others would build to enter the competitions.

This was the Star Wars model of an entertainment property generating merchandising revenue. It sounded much better to call the vehicles robots — and if I called the business “Robot Wars,” I might get a head start with branding from name association with Star Wars if Lucasfilm didn’t oppose my trademark application. They did not oppose it. I like to think it was because they wanted me to succeed with my new business.


Starting in late 1992, I began to create images of fighting machines that would give people a sense of what this 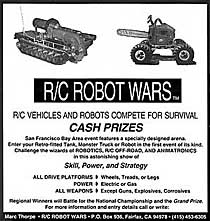 was all about and to generate some excitement. I didn’t bother trying to make my robots operational — I just wanted to make them look cool and have the illusion of working elements.

To attract entries, I placed advertisements in two publications: Radio Control Car Model Car and Art Week, a West Coast art magazine. I received a total of 70 requests for entry forms, which resulted in 17 actual entries for the first event.

Between late 1992 and early 1994 I scheduled and canceled event dates at Fort Mason Center in San Francisco several times due to lack of funds. I needed money to go forward, but was stretched too thin concentrating on the logistics of the event itself. I was exhausted from working full time, doing advertising, writing rules, dealing with trademark issues, arena design and contestant inquires and didn’t have much energy left to go out and sell the event. The idea was a good one, and I had the feeling that eventually the funds would come.

I remember New Years Day, 1994. Lying on my couch with the flu, beginning to have serious doubts about the future of the project, I put together a package with images, text, flyers, ads, letterhead … everything I had done to create Robot Wars … and sent it to Wired Magazine. Within a few days Wired called me and wanted to do an article with a photo. I was overjoyed — and panicked. A photo? My robot was a Photoshop-enhanced captured image of my radio controlled tank with various stuff on it — cool looking stuff — but none of it worked!

Then I realized that the robot didn’t have to work — like in the ads I placed — but it clearly needed to appear capable of serious destruction. So I went to the hardware store and bought a chain saw, and when the photographer, Bill Zemenek arrived I showed him the saw and the tank and told him that the saw sits on the tank; and he said that was cool and that it would look great. So we set up the shot. Jeff Raskin was to be the writer.

The story appeared in the February 1994 issue, and the photo was fantastic and the article was great. It listed my email address, and instantly, I had an unbelievable number of messages. I worked round the clock. I focused upon the rules, entry forms, design elements, contestant communications, poster, t-shirts, trophies, venue, etc. All of a sudden Robot Wars went from a bright idea to a widely known and embraced idea. 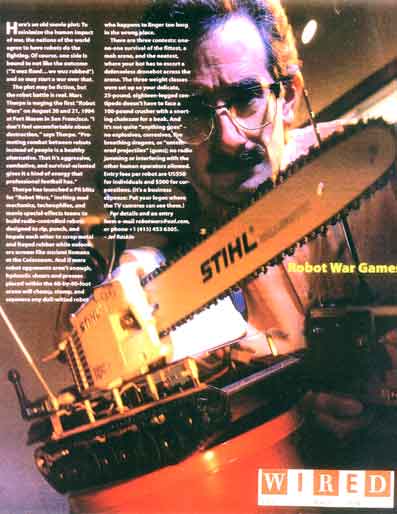 In June, 1994 still left me without sponsorship. I didn’t want to cancel another event, so in July 1994, a partnership was formed between Profile Records and myself.

The first event was a raging success. I knew that the bigger robots would be exciting to watch but I was concerned about the viability of the little ones … and without them there weren’t enough for an event.

When the first featherweight match began and I heard the excitement of the crowd, I knew at that moment that my idea was indeed as good as I had envisioned it to be.

Among the first competitors was Mark Setrakian (pictured, right), who had worked with me at ILM. I knew he would be 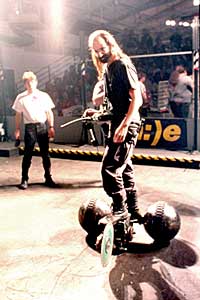 interested in something like this “mechanical sport,” as I called it. After his appearance with The Master at RW94, it was clear to everyone who was there how exciting this sport could be.

There was also Caleb Cheung, who was later to invent the very successful toy, Furby. And Mike Winter, who became a close friend over the phone before we even met. He built the X1. His daughter Lisa Winter is now a famous robot builder. There was also Charlie Tilford, a mechanical engineer with a wild joyous flamboyance and a winning robot called The Mauler. And there was the very young Scott LaValley with his exquisitely beautiful robot called DooLittle, which was prophetically named. Later incarnations by Scott were appropriately named DooMore and DooAll. Also, there was the quiet genius, Will Wright, legendary for creating the very successful games, Sim City and now the Sims. His robot was called JulieBot.

We all look back with nostalgia and amazement at that first event … it was charmed … for one thing, the arena had a mere 2 ft. high railing for protection and no one got hurt. 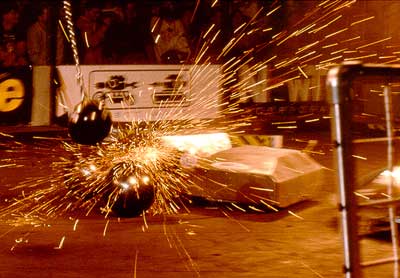 I was very happy those days
in spite of 16 hour days, 7 days a week. 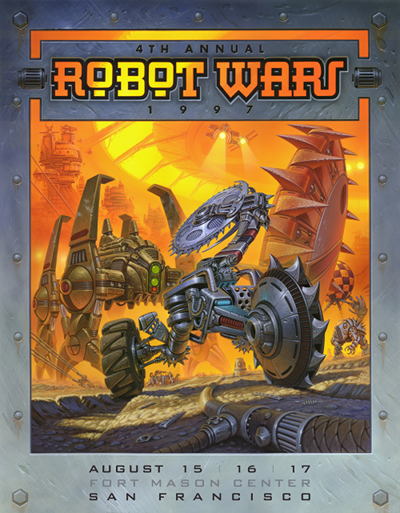 The above is a partial history of Robot Wars. I no longer have an ownership interest in Robot Wars, but I remain available to promote Robot Wars. Watch this space for further installments of the history.

For more on Robot Wars, read GEARHEADS, the Turbulent Rise of Robotic Sports by Brad Stone. 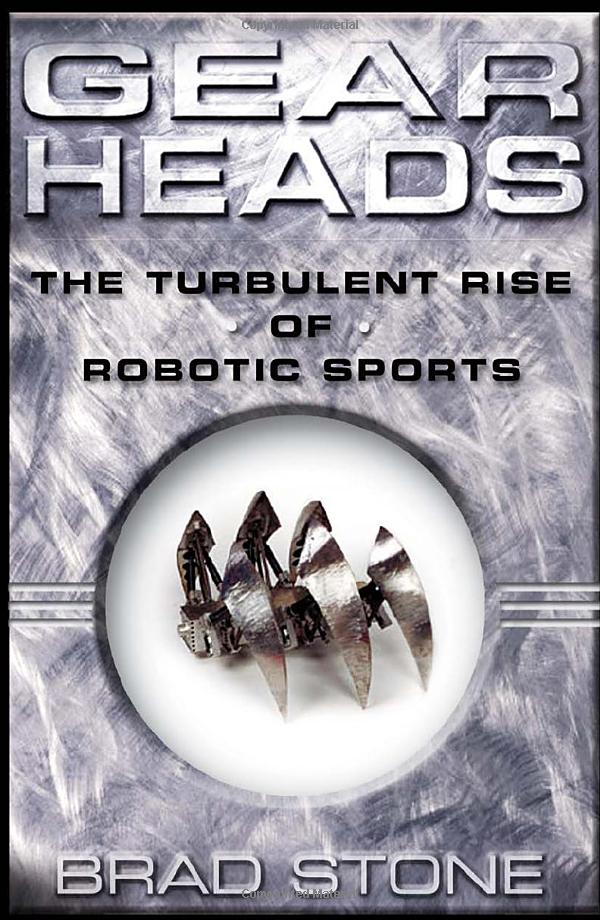