Home on the Strange 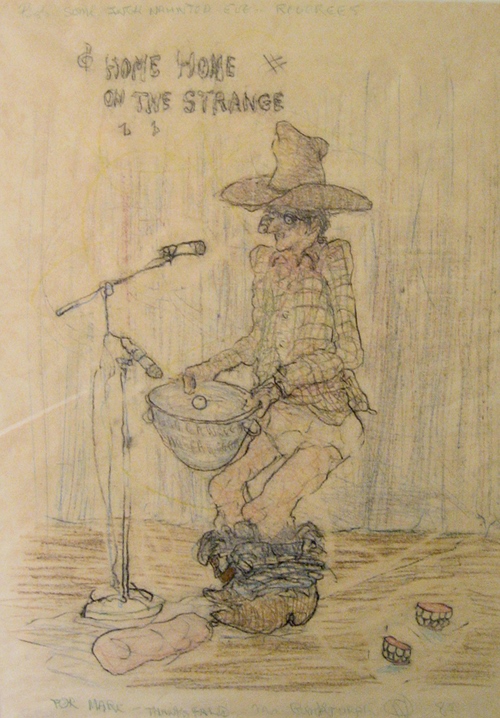 It had been a while since I graduated from UCD with an MFA and I was invited by Wiley to be in a one evening performance at the SF MOMA as a finale to his retrospective show there in 1982 … it would be in the Herbst Theater.

I spent long time thinking about what I would do.

At the theater it was rather frightening to look out from the curtain and see 500 people seated. When my time came to go on the logistics were formidable. Two microphones had to be placed in a specific way on stage. I had a group of prop helpers behind the curtain waiting for the cue to release the props which had to be wound up in advance and held still.

I began by heaving a big slug of clay held in a nylon stocking out onto the stage from behind the slit in the curtains. It was on a rope. It landed with a load thud. I was wearing a cowboy hat and joke glasses with eyeballs on slinky springs. Behind the curtain with the helpers I dropped my pants down to my ankles (wearing white jockey shorts) much to the surprise and astonishment of my helpers who I knew were thinking in silent unison, “He’s not going to go out there like that is he?”

I started spinning the ball bearing in the bowl … a metallic swirling sound broke the silence. I slowly hobbled out from behind the curtains. There were some giggles but mostly it was hushed. I made my way to the microphones and the lower mic picked up the sound of the ball and bowl causing the theater to resonate with this other-worldly beautiful rhythmic spacey sound. I began to sing, “Home, home on the strange …” I am not a singer with any natural or practiced ability. But I was as sincere as anyone could be….

When I got the end of the song I let the ball slow down and stop. I moved the ball by tilting the bowl and creating a whoop – whoop sound. Whooop, woooooo, ooooop, ooooh, wooooo, whoooooop.

Then I started the ball swirling around again when it was up to full speed I turned and began hobbling my way back to the curtain … that was the s ignal for my helpers to slide dozens of chattering teeth under the curtain and onto the stage in front.