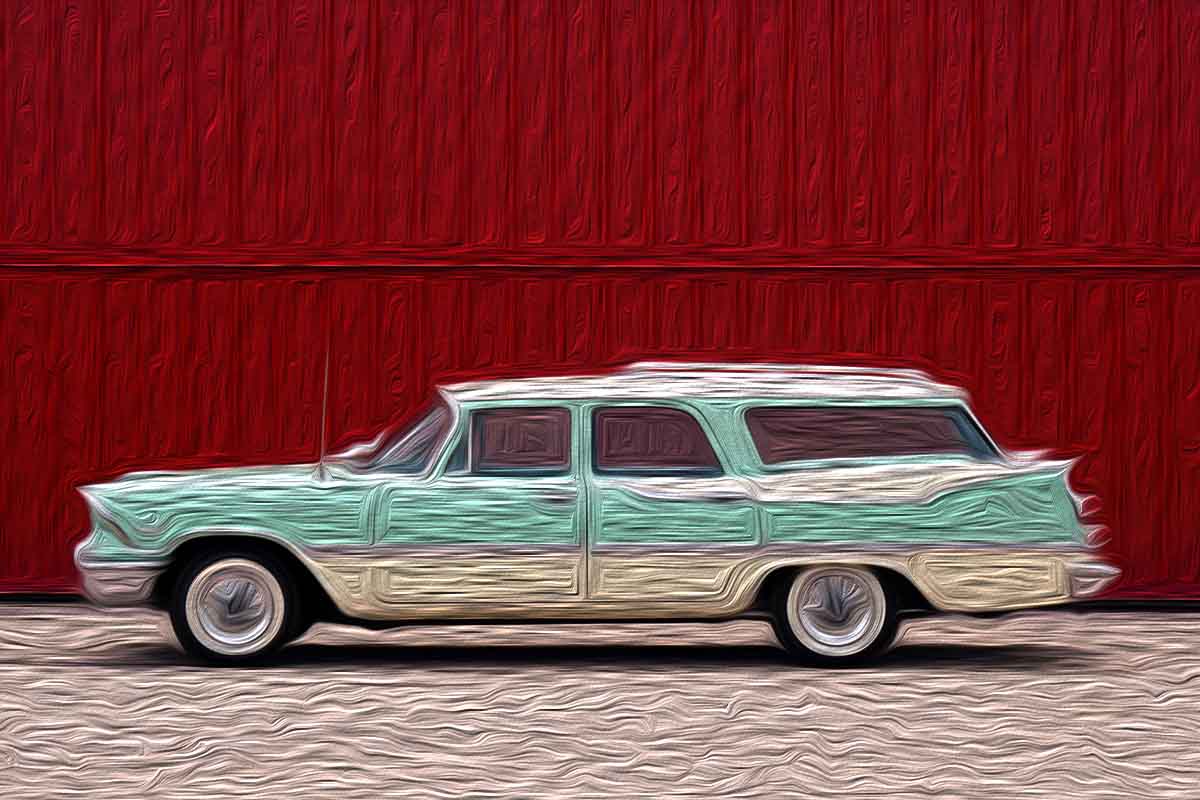 The assignment was an “object performance.” We would work in teams of two. My partner was Lucian. He was a year ahead of me at UC Davis. I was one of four out of four thousand applicants for the MFA program in 1969. That is how fortunate I was to be accepted into the program. We were rookies to the ones who had been there a year already. Lucian was intense and confident as I walked into his studio. I looked around and there were few clues as to what sort of art he made. That in itself was a clue that would not register for some time.

It was very hard to determine what any of these guys were doing. It was like they were working on enigmas in obscurity camouflaged by banality. I said, “What do you want to do?” Lucian said, “Well, I was thinking about using this big block of foam rubber I have.” I said, “How?” He replied, “It’s big. I thought we would just bring it into the building, up the staircase down the hall and into the seminar room.” I remember just looking at him with a blank expression. He could tell I didn’t get it. So he invited me to see the thing.

We went to another building where the foam rubber block was stored. He opened the door and it was there alright. All there. I mean not much else was there as it filled the room. Now the room was small but when you have an object in the room that is 4 ft thick by 6ft wide by 8 ft long you have a significant presence.

I asked, “How are we going to get this thing up there?” Ge replied, “That’s the idea.” I had flashes in my head of images of shoving, squeezing, pulling, and jamming … made me very nervous. I asked, “What will we do when and if we get it up there?” Lucian smiled and responded, “Nothing.” That made me more nervous and added a lot of confusion. We agreed. There was an unspoken understanding that I was the rookie so we would do it his way. Wiley knew what he was doing when he paired us. He knew a lot more than that. Wm. T. Wiley was one of the faculty dream team of Wayne Thiebaud, Robert Arneson, Manuel Neri, Roy Deforest who were all artists of great influence and recognition in the art world. Wiley is the artist / sorcerer who could balance truth and enigma with pain and humor in a very original and beautiful way. He was also the founder of funk art. Wayne Thiebaud is a formal master painter and one of the founders of pop art. Robert Arneson transformed ceramics from craft to fine art. Manuel Neri made figurative sculpture that was both revolutionary and classic at the same time. Roy Deforest was the master of visions and painterly adventure both naive and sophisticated at the same time.

I think Wiley saw me someone who knew the value of risk but who was too invested in skill and beauty to be able to know what risks to take. The object performance by Lucian and I was first on the schedule. I wasn’t a part of it and wasn’t there. Just the small quiet meeting with Lucian and his foam block was an introduction to risk that literally knocked me on my ass.

The Sunday before I had gotten into my 1959 Chrysler Desoto wagon to get a newspaper and upon returning I opened the massive driver side door and felt something that I knew all too well and became frozen with fear. My back had spasmed and I was in danger of re-rupturing a lower lumbar disc. Somehow I made it into the house and onto the bed on my back with my knees up. That is how I remained for two weeks. That was the beginning of grad school.

There were graduate studios spread out all around the art dept. vicinity. One I particularly liked was the two Steve’s studio. One Steve made things like big shelves on the wall stacked with huge numbers of plastic dishes which where supported by a vertical brace. There was a trip line that when tripped by the exhibit viewer would cause the many stacks of dishes to crash and cascade onto the floor everywhere. The other Steve had an easel set up in the middle of his space with a cadaver cat lashed to the easel. The cat had a screaming expression. Since I missed out on the performance with Lucian I had to do something on my own. What I did was a stunning failure. It was “about time.” I had various people do different things while a timer ticked for several minutes. Those minutes were long. It was excruciating. It is true what they say about failure. That is how you learn.

Davis, CA is a college town with a lot of bicycles and a lot of dogs. At the house where I lived there were at least five dogs. It had been less than a year since my awful performance debut. After one seminar class Wiley announced that the following week a PBS news reporter would be coming to Davis with him in connection with a story on him. He said if anyone has something they want to do or show it would be welcome.

Some weeks earlier Wiley had been over for dinner at my house and he gave me some advice. His advice was,”You have to make yourself vulnerable.”

A few days before the visit by the PBS reporter, Charles Scherer, was his name, I was alone at home with the dogs and I decided to take some mescaline. As it came on I felt the power of it build in me. My feelings of self-importance began to fade. The gritty organic essence of life bloomed. I could see and feel the density of space. It was me and the dogs. An Irish setter, a lab, two whippets, and one other I can’t remember.

I had a collection of old 50’s music. 45 rpm and an old 45 player. I played one of my favorites, “Sleepwalk” by Santo and Johnny. A dreamy instrumental with a spellbinding guitar lead and melody that melts your heart and inflames your imagination. I wondered how I could use this. How I could make myself vulnerable. By that time the sun had set and it was very dim in the room. As the music played I went and got a flashlight. I got some biscuits for the dogs.

I went back into the room and all the dogs were staring at me. I pulled my pants down around my ankles. With my jockey underwear on I secured the flashlight under my crotch using rubber bands and had it pointing forward. The record had been over for some time. I played it again. got on my knees. Turned on the flashlight and moved around the room on my knees while feeding the dogs. The music, the dogs, the light and shadows playing on them and the walls, the crunching, the love light coming from my crotch … tears streaming from my eyes I felt like the Lewis and Clark of creativity. All at once I felt the meaning of prayer, art, theater, and culture. I felt transformed by a ritual of my own making that took me into the center of my heart.

I repeated this for Wiley, his guest, the other seminar students in the art dept. basement. In a quote from the book, “Gearheads: The Turbulent Rise of Robotic Sports” by Brad Stone, Wiley said: “We thought he was going to get with the dogs or something.” And he added,”It was incredible, a waking dream.” I was not imagining the effect at home. Everyone felt it. I was no longer a rookie.

It was 1970. that was one of the early examples of what became known as performance art. Soon after my performance a visitor showed up at the seminar. Dan Snyder was from the drama dept. right next door. He and Wiley wanted to collaborate on a theater production. We were invited to contribute.

For the last year I had been making sculpture and collage. The sculpture was very well crafted wood construction and a large stainless steel fabrication.

The painted wood sculpture was like my other art work built through an intuitive process of addition that resulted in something for which there was no preconception. I would start with a part which would seem to call for another and then another etc.

What I ended up with in this instance and a year’s time was essentially a cradle. It was open in the middle as if it was not meant to be functional. Which of course it wasn’t. Wiley said it was an icy way of looking at child birth. It also had for music boxes attached that when played together provided a rather psychotically playful and disturbing cacophony of silent night.

The stainless steel sculpture I called hurdle looked like a combination of children’s playground equipment and giant surgical weapon.

It was about 3 1/2 ft. high and 4 ft. wide and 5 ft. long. it was made mostly of tubes with three large blades in the shape of arrow heads pointing down and spaced evenly and in line. It weighted about 150 lbs.

These two works reflected my fascination with the relationship between threat and attraction. And they were certainly both attractive and threatening.

After I saw Straw Dogs with Dustin Hoffman I wrote to him and sent a photo of my sculpture telling him how much I liked his performance in that movie and how well it reflected what I was trying to express in my sculpture … he wrote back saying it certainly looked like something out of straw dogs.

At the prompting of Bob Arneson, I was offered a show at the Davis Art Center. It was my first real show and I decided to make into a retrospective / group show hoax.

A reporter from the Sacramento Bee called me up early in the morning and asked me about the show. With no prior experience dealing with the press and no preparation I ended up telling him it was all my work and he ran the review under the heading, “harmless hoax …”

“Out Our Way” was what Wiley and Snider called the series of theater-art collaborations that would be produced over the next several years. They were sort of like a very sophisticated dumbed down vaudeville. In other words the was a sharp intelligence behind the dumb presentations of song, dance, sight gags etc. Occasionally someone would do something that transcended definition. But after you saw it you knew it was great theater or art or both. Jock Reynolds, a very talented grad student one year behind me, did one of the best examples which was a series of visual “curtains” that were flown in using the mechanical features of the stage for the specific purpose of flying in objects, curtains, etc.

The curtains consisted of various materials attached together in a grid or horizontal or vertical array … blocks, tubes, panels, boards, spheres … big … about 50 ft. long and 25 ft. high…. These curtains would descend with house lights off and dramatic lighting on for effect … to the mesmerizing and hypnotically shimmering music of Phillip Glass. When fully descended the long horizontal pipe above that held the curtain would be gently pushed causing the whole assembly to sway side to side…. It was absolutely exquisite and lovely. The best marriage of theater and visual art I have ever seen.